This Week In the Great Lakes Hockey League

Some high school teams and leagues in Ohio have had to suspend play for various COVID-related reasons this winter, but the Great Lakes Hockey League forges ahead with three league games this week.

With at least one team in each previously-scheduled league game being quarantined or shut down by their school at the time, the league standings still read all zeroes heading into this weekend.

That will change with three two GLHL contests on the docket.

Gilmour Academy and St. Edward are both off to strong starts and, with the first state coaches poll coming out next week, go head-to-head on Friday night at Winterhurst.

Gilmour was scheduled to be back in action Saturday afternoon at home against neighboring University School, but the Preppers found out Thursday night that they would be quarantined for 14 days.

Walsh Jesuit and Padua Franciscan will meet Friday at Strongsville's OBM Arena in the other league game. It is a re-match of a game won by Walsh at their Thanksgiving Tournament, 5-3, on November 29.

With the uncertainty surrounding winter sports schedules this season, and points percentage a possible metric for seeding teams in the Cleveland Cup, the importance of every league game is magnified even more. 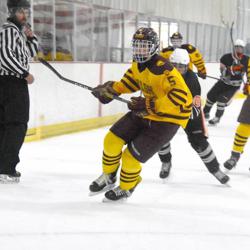 GILMOUR ACADEMY – Gilmour Academy will jump into league play visiting St. Edward at Winterhurst on Friday. It is just the latest in a string of games against elite Ohio high school competition for Gilmour. The Lancers did not shy away from a tough pre-league schedule, playing three straight contests against four-time defending state champion Saint Ignatius. Gilmour managed a tie and a pair of one-goal losses in those three games, making a strong statement despite not picking up any “W”s…The Lancers have spread around the scoring with 11 players scoring 1-2 goals each...GA has seven returning forwards from last year's team but only one player, junior Conor Underwood, back on defense. Five skaters, meanwhile, move up from the U16 team. "We added players from our Varsity B team on defense with seniors Tate Simpson and Nick Kolar, junior David Shidlovskii and sophomore Brennan O'Neill," said head coach John Malloy.

HOLY NAME – The Green Wave of Holy Name won their first two games of the season, played in the Walsh Thanksgiving Tournament at The Pond, 5-2 over Benedictine and 4-2 over Padua Franciscan. The Namers have lost their last two games, however, scoring just a pair of goals in the process and getting shut out by Findlay, 4-0, in their most recent contest on Saturday. Holy Name tries to get back on track when they host Erie Cathedral Prep Saturday night…Dom Lugo figured in both goals in a 4-2 loss to University School in the final game of the Walsh Tournament and leads the team in goals (3) and points (5).

PADUA FRANCISCAN – The Padua Bruins made some noise early with a win and a tie in their first three games of the season as well as some competitive games against GLHL foes Holy Name (4-2 loss) and Walsh Jesuit (5-3 loss) at the Walsh Thanksgiving Tournament. The win was a 3-2 decision over Toledo St. John’s on November 21. They tied Cincinnati Moeller, 2-2, in the first game of the Walsh Tournament and also played North Royalton to a 4-4 draw last weekend at Winterhurst. Three different goaltenders have already seen time between the pipes for the Bruins, including sophomore Aidan Knox, who stopped 25 of 27 shots against Moeller.

SHAKER HEIGHTS – This is not how Shaker Heights hoped to celebrate their 50th anniversary season (see below). The Red Raiders have yet to play a game this season.  They have been held out of action by the Shaker school system and the temporary closure of their home rink Thornton Park, but head coach Matt Bartley says the team was allowed to start practicing last week and expects to compete at the Padua Tournament December 18-20. “Thornton is tentatively opening on Monday,” said Bartley. “Hopefully, that happens and we can get back to normal and get moving with the season”.…Retired coach Mike Bartley got some face time on Canadian TV recently when it was discovery that, unbeknownst to him, he appears on a WHA hockey card.

ST. EDWARD – Just like Gilmour, the Eagles of St. Edward have put together a challenging non-league schedule in an effort to prepare for their league slate, which begins this Friday night at home against GA. St. Edward has put together a 5-0-1 mark which includes wins over top teams from the Toledo and Columbus areas as well as a 5-1 non-league win over University School last weekend. The tie came against Toledo St. Francis at the Cold Turkey Shootout in which they were penalized 11 times, but St. Francis was sent to the box just once...In addition to the big league tilt with Gilmour on Friday, Ed’s will host ancient rival Saint Ignatius at Winterhurst on Saturday.

UNIVERSITY SCHOOL – (update: US had a positive COVID test and will not only miss their league game with Gilmour, but the Padua Holiday Hockey Tournament as well.) With their home rink in Cleveland Heights closed down, University School has been logging some miles to get games in. In a normal year they would have been in Jamestown, NY for a major tournament last weekend but it was cancelled, so the Preppers put together an Ohio-based test for themselves instead. First, they headed to Bowling Green where they lost a 4-3 overtime decision to the Bobcats. The Preppers then headed home and played Gilmour Academy tough in a 5-4 loss Sunday morning before heading over to the West Side to play again Sunday night against St. Edward in Rocky River. US got out to a slow start in that one and never recovered in a 5-1 loss.  “The first period was a little bit of a wakeup call to see what speed we need to be running at,” said US head coach Andy Gerow. “But I liked how our guys responded in the second with a goal and a couple other chances to almost tie the game.”  Sophomore Kellen McGarry’s first career varsity goal was the only US tally in the game.  “We don’t like to make excuses and we tip our caps to Coach Sullivan and his staff because they have that team running at an extremely high level right now,” Gerow said. “Just like our goal is to walk away from Jamestown as a better team, I think we got better this past weekend by the gauntlet we put our guys through.”

WALSH JESUIT – The Warriors are slipping into University School's spot at the Padua Holiday Hockey Tournament December 18-20. It will be their first opportunity to play at the prestigious event. Despite the closure of their home rink at Kent State University, Walsh Jesuit still managed to host their Thanksgiving Tournament at The Pond. The Warriors tied Medina, 1-1, in the opener then added wins over Benedictine (5-2) and Padua (5-3). Last weekend the Road Warriors headed Southwest to play at Springboro (5-1 win), Talawanda (2-2 tie) and St. Xavier (5-3 loss). Walsh’s scoring has been balanced with four players tied for the team scoring lead with seven points: Bill Holtzer (4-3-7), Ryan Kerscher (4-3-7), Hunter Nalepka (3-4-7) and Joe Holtzer (2-5-7). Joshua Weiner (4-2-6) is also tied for the team lead in goals. 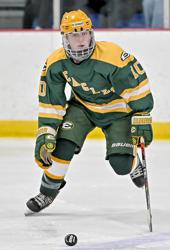 St. Edward junior forward Jack Mansour scored a hat trick in a 6-1 win over Findlay and picked up six points (4-2-6) over the final three games of the Cold Turkey Shootout to earn Great Lakes Player of the Week honors for the week ending November 29.

“Jack had a great weekend and his line is really buzzing right now”, said St. Edward head coach Tim Sullivan. “He’s put a lot of work in and is starting to see the game the right way.  He’s slowing the game down mentally while speeding up physically.”

Mansour scored 16 goals in 34 games last season as a sophomore, including a stretch in early February where he scored six times in a four-game span

The University School Preppers dropped a pair of one-goal games last week but it was not due to a lack of production from senior forward Nick Flowers. Flowers produced a goal and an assist in each game as he looks to build on a junior season that saw him finish third on the team in both goal (13) and points (26).

“Nick is a four-year varsity player and brings a wealth of experience to this year’s team,” said US head coach Andy Gerow. “He is a fierce competitor that hates to lose and brings it every time he is on the ice. He has the unique ability to be a physical presence on the ice while also being an elite goal scorer. Nick has already had multiple games this season where he delivered big hits on one shift and then scored a highlight reel goal on the next shift. We expect Nick to continue to build off his great start to the season.” 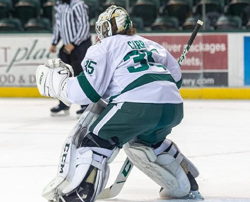 Columbus-born goaltender Michael Carr played two seasons at Gilmour Academy, using his time in Gates Mills as a springboard to Junior A hockey in Ontario and, eventually, NCAA Division I hockey.

“Michael was a relentless competitor who brought it every game for us at Gilmour Academy,” said Mike Chiellino, the head coach of Gilmour’s Prep team.  “He had incredible stats for us in both of his years here and lead the Midwest Prep Hockey League his senior season among all goalies in every category.”

After two seasons at Gilmour, Carr went on to play two seasons on Junior A hockey with the Cornwall (ON) Colts. He was a workhorse during the 2018-19 season, appearing in 58 games for the Colts and posting a stellar .918 save percentage.

Bemidji State University was impressed with Carr’s resume and recruited him to play for the NCAA Division I program in the Western Collegiate Hockey Association. After biding his time and practicing hard as a redshirt freshman last season, he made his NCAA debut November 22 against Minnesota State.

Carr said Gilmour was a great place to mature on and off the ice.

"It really is a challenge," Carr said about the challenges both inside and outside the rink at the NCAA level. "I think about my time at Gilmour quite a bit and how it helped me get to where I am today." 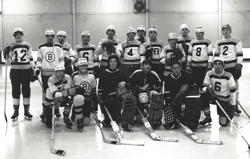 COVID-19 casts a long, ominous shadow over the Shaker Heights High School hockey team with practices and the start of the 2020-21 season temporarily suspended, thanks to the virus.

Face masks, social distancing, Zoom meetings, no access to Thornton Park locker rooms, and eerily vacant grandstands have turned everything the team does into a strange, awkward ordeal. Throw in a contentious presidential election for added drama and distraction.

One thing the virus and politics cannot touch is the 50th anniversary of Shaker’s first game in modern history, played on December 3, 1970.

Tumultuous, tragic 2020 in many ways mirrors the troubling times of 1970.

Anti-Vietnam war protests raged as a wartime military draft hung over the heads of high school seniors.  Shaker Heights grabbed international headlines on February 2 when its police station was bombed and flattened by a vengeful Shaker graduate, resulting in 14 serious injuries and one death—the bomber. As a result, Thornton Park was closed for months, becoming the temporary home of the police department. Four Kent State University students were shot and killed by the National Guard on May 4, and 75 members of the Marshall University football team perished in a plane crash on November 14.

“I Think I Love You” by the Partridge Family, and “The Tears of a Clown” by Smokey Robinson and the Miracles topped the music charts. Moviegoers jammed theaters to watch “Scrooge” and “Lovers and Strangers,” and the defending Eastern Conference champion Cleveland Browns prepared to face the Houston Oilers at the Astrodome on Monday Night Football.

And the day the Shaker High School hockey team—lead by co-head coaches Bob McBride and Jim Weiss—took flight, and was on its way to a magical 18-0-1, state championship season.