Gilmour Academy scored with :40 left in the third period to tie the game and, when overtime didn’t decide it, Gilmour and St. Edward went to a shootout to decide the 2021 Cleveland Cup championship.

Each team scored on one of their three shots in the regulation shootout, then senior forward Jack O’Sullivan scored in the first sudden-death round to give St. Edward the Cleveland Cup title. It is the first for St. Edward in the eight-year history of the GLHL.

St. Edward goalie Evan Wrightsman, who made 29 saves in the game, stopped Gilmour's Ricky Hughes in the first sudden-death round, giving O'Sullivan a chance to win it. O'Sullivan buried a five-hole shot on Gilmour senior netminder Andrew Harrington (31 saves) to touch off the celebration for the Eagles. 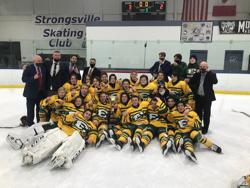 "To be honest I go five-hole all the time in practice," said O'Sullivan. "So I figured I might as well try it out."

At the other end of the rink Wrightsman stopped three of four shooters.

"My heart was pounding the whole time," he admitted. "Thank god for Jack. I heard it hit the back of the net and knew exactly what time it was. Now I can breathe."

It was fitting that the game was in the hands of two players who have spent a full four-year varsity career together.

"This guy (Wrightsman) has been grinding for four years to be in net for these games," said O'Sullivan. "So I'm glad we could get the win for him."

Gilmour’s Frankie Valenti was credited with the tying goal with :40 left in the third period and Harrington pulled for the extra attacker.

Valenti threw the puck to the front of the net from the left corner. Joe Roddy was there but it appeared the puck banked into the net of a St. Edward player's skate.

"We had some opportunities to win it in overtime and missed the net," said St. Edward head coach Tim Sullivan. "But I appreciate the kids looking for those spots instead of hitting the goalie in the chest."

Sullivan said when he heard shootouts would be used to decide tied Cleveland Cup games after five minutes of sudden-death overtime, he had the team practice them.

"I have never in my 20 years of coaching practiced shootouts," he said. "But we practiced them this week just in case."

Wrightman was tested early, making a point-blank glove save on Alex Young just 21 seconds into the contest.

Just 1:47 into the game, Jack O’Sullivan dug a puck away from a Lancers defenseman behind the Gilmour net and fed it in front to Lucan Newton right on Harrington’s doorstep and he put the puck upstairs from in tight.

St. Edward had several failed breakouts including a turnover to Wrightsman’s left that resulted in a few point-blank chances that the Eagles’ goaltender turned away.

Gilmour’s Jakub Sadlacik fed it to Jimmy Robidas who got inside the defenseman and suck a quick backhand shot under Wrightsman’s arm to tie the game at 8:10.

The first power play went to St. Edward with just over five minutes to go in the period. The Eagles worked the puck to the net front on a few occasions and were whacking away at the puck in the crease, but Harrington managed to cover it up each time and the first penalty was successfully killed off.

Gilmour got their chance on the man-advantage with 2:11 to go in the period. The Eagles compounded their situation with a second penalty 1:19 later, putting Gilmour two men up for 41 seconds. They were unable to manufacture more than one high-danger shot which missed a wide-open net. O’Sullivan came up with a big block on a shot from the point late in the kill and the period came to a close with the score tied, 1-1.

Gilmour still had 1:09 left on a power play with a fresh sheet of ice to start the second period but could not gain the zone with possession. Back at full strength, St. Edward had the better chances early in the second frame.

Tyler Fowles sent Newton in alone with a long stretch pass from deep in the Ed’s zone, but Harrington held his ground to keep the game tied. He made another stop on a partial breakaway moments later when Atticus Durst made a clever chip off the boards to break O’Sullivan free down the right wing. That was followed by a sharp left pad save on a Joshua Szopo slapper from the left circle.

At the 5:36 mark, on a faceoff to Harrington’s left, Sean Kolenich won the draw, Noah Schultz bumped it back to Ethan Payne at the point and his shot was re-directed by Kolenich to give gave St. Edward the lead back. Noah Schultz and Ethan Payne drew assists on the play.

About a minute later there was a puck bouncing in front of the St. Edward net with Wrightsman swimming a bit in his crease, but the Lancers were unable to corral the loose puck for a quality shot and Wrightsman covered up.

Gilmour took a tripping penalty :52 into sudden-death to put the Eagles on the power play. The St. Edward PP boasts three all-league players, but GA killed it off.

With 1:48 to go in the second period, Kolenich took Gilmour’s Kyle Laws into the boards heavily and picked up a roughing call so, for the second period in a row, GA went on the power play late in the period.

Three times Gilmour fired the puck to the front of the net looking for a re-direct or rebound, but each time Wrightsman made the save and froze the play.

That set the stage for a tight-checking third period. O’Sullivan, in particular put together a tremendous shift, single-handedly battling three Gilmour players along the wall in the Gilmour end, keeping the Lancers pinned in their zone, then made a nice play on the backcheck anticipating a pass to the slot and knocking it out of the St. Edward zone.

Every puck possession was challenged in the final period of regulation and both teams had to battle to get pucks to the net. The action intensified in the last five minutes, as Gilmour pressed for the tying goal.

The game was a re-match of the 2020 Cleveland Cup championship game, won by Gilmour.

St. Edward head coach Tim Sullivan, who was named GLHL Coach of the Year last week, won the Cleveland Cup as the head coach of Holy Name in 2019.

"It's the same tournament but it's different," said Sullivan. "I'm going to walk into school like a peacock with that trophy. I'm just so excited for these boys because they've worked hard."

There is no chance of a re-match in district play as the two teams will play in separate brackets beginning next week.