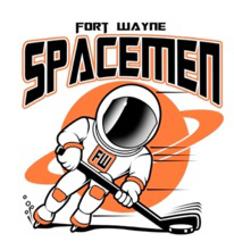 The Fort Wayne Spacemen are proud members of the U.S. Premier Hockey League.  The USPHL which operates in 17 of the 50 United States, is the nation’s largest amateur hockey league.

The ultimate goal of the Ft Wayne Spacemen, is to prepare and develop players for college hockey and beyond.  The Spacemen will compete in the Premier Midwest – East Division which is made up of teams from Illinois, Indiana and Michigan. Teams are made up of players ranging from 17-21 years old and coming from all around the world.

Ft Wayne offers State of the Art Facilities to assist with player development.  The Spacemen’s home rink is the SportOne Parkview Ice House. The off ice conditioning and trainer facilities are located on the same campus at the SportOne Parkview Fieldhouse. The team is committed to World Class Coaching, Professional Trainers and Medical Staff all housed in our modern facilities, making the Ft Wayne Spacemen a top quality team and destination for any Junior Hockey Player striving to get to the next level.

Wearing #6 for the 2021-2022 season is defensemen Benjamin Cope! Come see us play on October 29th for opening night… https://t.co/lZvGCVvXSV

Wearing #4 for the 2021-2022 season is defensemen Ben Neverve! Come see us play on October 29th for opening night!… https://t.co/mmuyfnBpAl

Wearing #2 for the 2021-2022 season is defensemen Fabien Pilon! Come see us play on October 29th for opening night!… https://t.co/SffZzvu4Rx

Wearing #1 for the 2021-2022 season is goaltender Aiden Orlikowski! Come see us play on October 29th for opening ni… https://t.co/WE9LYfrP9c