This Week in the Great Lakes Hockey League

The 24th annual Padua Holiday Hockey Tournament, scheduled for this weekend, is the latest COVID casualty. The event was canceled out of an abundance of caution after possible exposure at Padua Franciscan.  Even though the tournament was called off, some of the top high school programs in the state are making their way to Northeast Ohio to face off with Great Lakes Hockey League teams.

St. Edward, the #1 team in the My Hockey Rankings heading into the weekend, was able to pick up three games against top-flight competition.  Included in the three-in-three weekend is a re-match with #2 Toledo St. Francis on Saturday afternoon at Winterhurst. The two teams battled to a 3-3 tie last month.

The Eagles are coming in with some momentum after becoming the first Ohio team in four years to beat four-time defending state champion Saint Ignatius last weekend.

Also on Saturday, Walsh Jesuit and Holy Name took advantage of their weekend schedule opening up to re-make a postponed league game. They will square off at OBM Arena.

Even if the Padua Tournament had gone off as planned, University School would not have participated. The Preppers are in quarantine for the second time this season.

“I wish I could say it is easier the second time,” said US head coach Andy Gerow. “But they have both been difficult.”

While the Preppers are on the shelf, Shaker Heights is finally getting on the ice. The Red Raiders are the final GLHL team to play a game, making their season debut Friday night against Walsh.

GILMOUR ACADEMY – Gilmour Academy lost to St. Edward, 6-0, at Winterhurst Friday night, then had their opportunity to wash the taste of that game out of their mouth taken away when their league contest with University School Saturday needed to be postponed due to US being in quarantine.  The Lancers will have to wait even longer as their annual trip to the Cornfield Tournament at Culver Academy (IN) was canceled and they were not able to schedule any games for this week…Despite just two wins in their last six games (2-3-1), GA checked in at #7 in the My Hockey Rankings, which speaks volumes about the challenging schedule the Lancers have taken on…Stat of the Week:  Gilmour netminders Ian Anderson and Andrew Harrington have identical numbers of minutes played, shots faced and goals allowed…The Lancers’ league game against University School has been re-scheduled for February 5 at 4:30 p.m.

HOLY NAME – A 4-3 win over Benedictine last weekend upped Holy Name’s mark on the season to 3-2-0. Four different Green Wave skaters scored in that game, including Dom Lugo's game-winner with 1:53 remaining, and Mathias Svitov made 25 saves for the win...Instead of competing in the Padua Holiday Tournament, the Namers will face Walsh Jesuit in their first league game of the season Saturday at 3:00 pm at OBM Arena in Strongsville.

PADUA FRANCISCAN – The Padua Bruins have put the puck in the net 16 times in their last four games, but do not have any "W"s to show for it (0-2-2).  Sophomore Shane Helman (4-2-6) and senior Andrew Lampa (1-5-6) have paced the Bruins’ potent attack…In the Padua Holiday Tournament preview episode on the Ohio Hockey Digest podcast, Padua head coach Perry Cohagan said his team keeps getting bigger and more competitive each year (Coach Cohagan's segment begins at the 30:12 mark).

SHAKER HEIGHTS – Shaker Heights is scheduled to (finally) take the ice Friday night against Walsh Jesuit in a non-league contest at OBM Arena in Strongsville (7:30pm puck drop). The Red Raiders have been kept on the sidelines by the Shaker school district and the temporary closure of their home rink Thornton Park…The Raiders are not scheduled to play against until December 30, when they have a league game at Gilmour Academy, but head coach Matt Bartley is trying to fill the schedule in between now and then. “The team is very excited to get back on the ice,” said Bartley.  “Practice has been going well, but I am sure there will be some rust to kick off, seeing as we haven't played a game or scrimmage yet, but we are happy to finally get back out there and having the opportunity to play.”

ST. EDWARD – Convincing wins over traditional powers Gilmour Academy (6-0) and Saint Ignatius (7-0) last weekend propelled St. Edward into the top spot in the My Hockey Rankings. The Eagles were the first Ohio-based team to defeat Saint Ignatius since Toledo St. Francis on December 17, 2016…Senior forward Lucas Newton figured in seven of the 13 goals scored last weekend, scoring twice and picking up five assists, and now leads the team with 16 points (7-9-16) on the season.  Senior Noah Schultz leads the team with seven goals, followed by Newton (6) and Sean Kolenich (6)…St. Edward has allowed just three goals in their last five games – all wins – since a 3-3 tie with Toledo St. Francis on November 28 at the Cold Turkey Shootout.

UNIVERSITY SCHOOL – A frustrating season for the University School Preppers hit another snag last week when the team was forced into their second quarantine of the season. “We felt we were just settling into a normal routine and then got put on our second quarantine,” said Preppers head coach Andy Gerow. “We are so used to seeing each other almost every day between November and March that when we have had to pause for these quarantines it just doesn’t feel normal.” The hiatus also forced US to wait longer for an opportunity to break up a three-game losing streak. The Preppers are scheduled to return to play at the Cleveland Jesuit Classic at Brooklyn Rec Center December 28-30. In addition to the host Saint Ignatius Wildcats, US will face Sylvania Northview and Loyola Academy (IL). “If our guys have proven one thing this year is that that they won’t let anything hold them back,” said Gerow. “So far this year we have dealt with the closure of our home rink, early morning practices on the west side and now our second quarantine, but this group’s focus has stayed on their goals. We have implemented daily work out challenges to keep them in shape for when we return and keep that competition among each other even if it is at home. Nothing can replace hockey conditioning, but we are doing our best to stay ready.

WALSH JESUIT – It was three one-goal wins in three days for Walsh Jesuit last weekend as they defeated Padua (5-4) and Benedictine twice (3-2 and 4-3). The Warriors have managed to get in more games (11) than any other team in the Great Lakes Hockey League this season…The win over Padua last Friday was a league win, and there are two more GLHL standings points on the table Saturday afternoon against Holy Name…There is a four-way tie for the team scoring lead between senior Hunter Nalepka (4-5-9) and juniors Josh Weiner (7-2-9), Ryan Kerscher (5-4-9) and Joe Holtzer (2-7-9).

A pair of stellar goaltending performances sparked the St. Edward Eagles to wins over two of the top teams in the state of Ohio last weekend.

Junior Ethan Payne kicked out all 19 shots sent his way by Gilmour Academy in a 6-0 win over the Lancers on Friday. 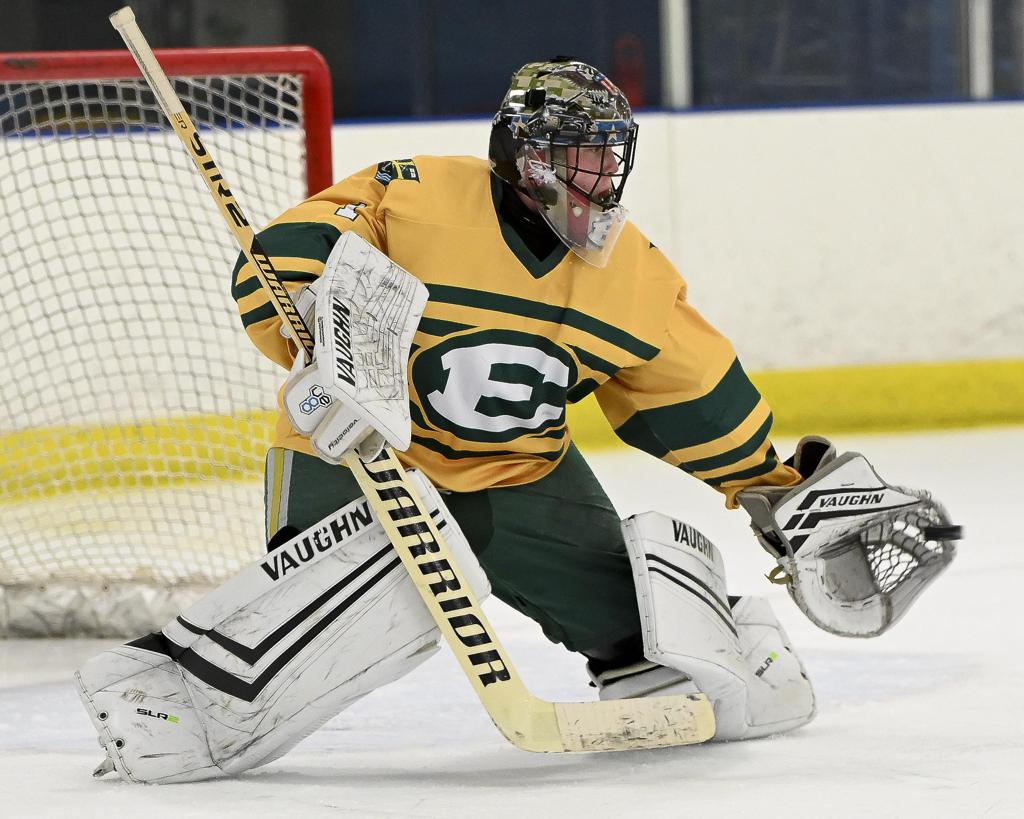 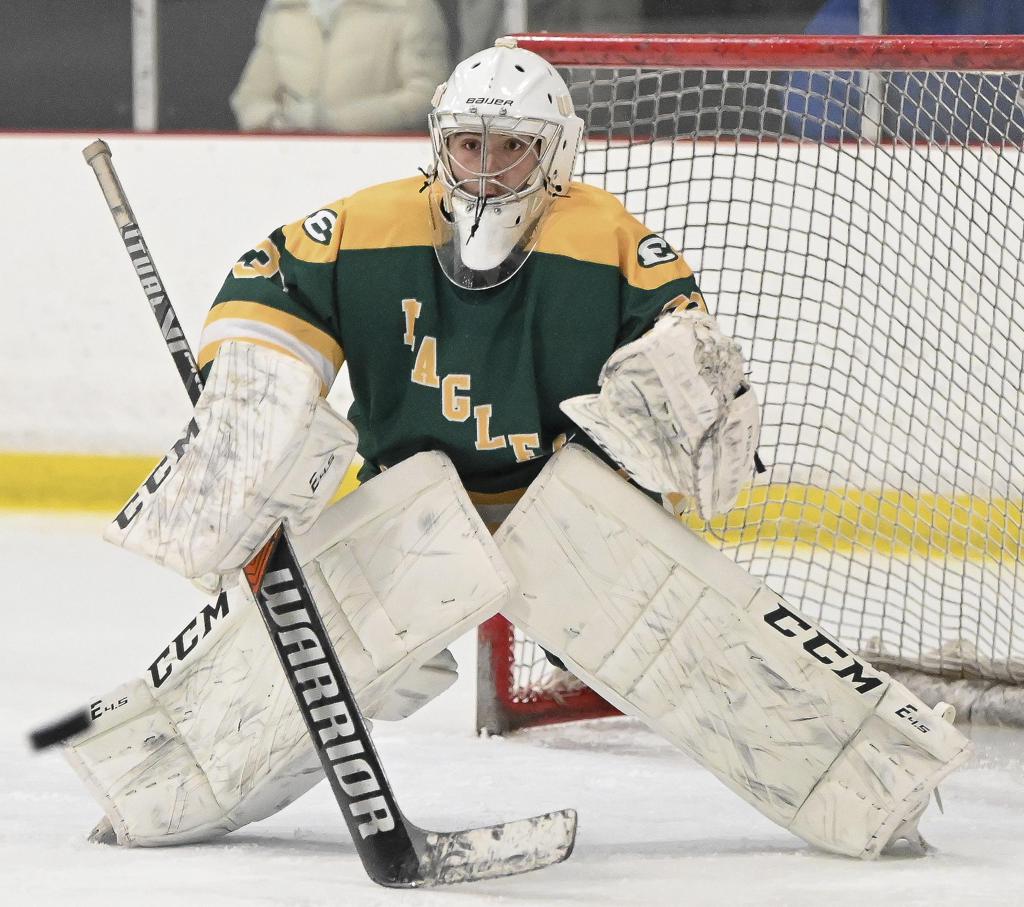